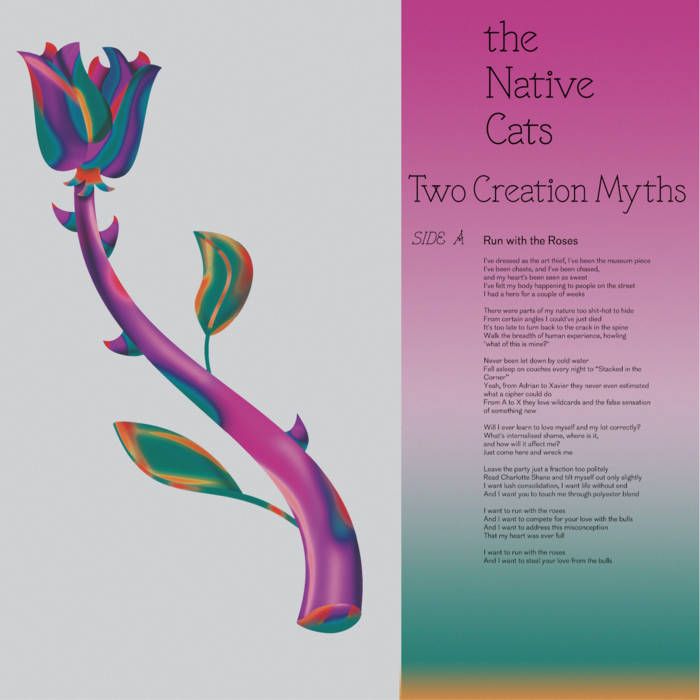 Lars Gotrich "I'd like to dedicate this record to Scott Walker." Oh, Chloe Alison Escott, you've now got a direct line to my heart. Favorite track: Run With The Roses.

Artwork and layout by Molly Dyson

These songs were written and recorded in Nipaluna.
We acknowledge and pay respect to the muwinina people, who are the traditional owners of the land.
Sovereignty was never ceded.

Run With The Roses video
www.youtube.com/watch

Two Creation Myths is the new 7” from Tasmanian exploratory post-punk duo the Native Cats — singer and synth operator Chloe Alison Escott, bassist Julian Teakle — out on 10 February on Rough Skies Records to commemorate the conclusion of the band’s first 12-year cycle and the commencement of their next one.

A further intensification and advancement from their explosive 2018 releases John Sharp Toro and Spiro Scratch. “Run with the Roses” is the singer at her most revealing and her most evasive. A bass line like an eighteen-wheeler barrelling down the highway, six searing verses from a woman standing defiantly between the lanes. “Sanremo” is a slow roll down a jagged-edged rainbow, a retelling of a pivotal moment in early Italian pop music history, a reminder that invincibility is a joy that implies a threat. A pair of songs that sharpen selected arrows of the past and load them into the bow of the present.