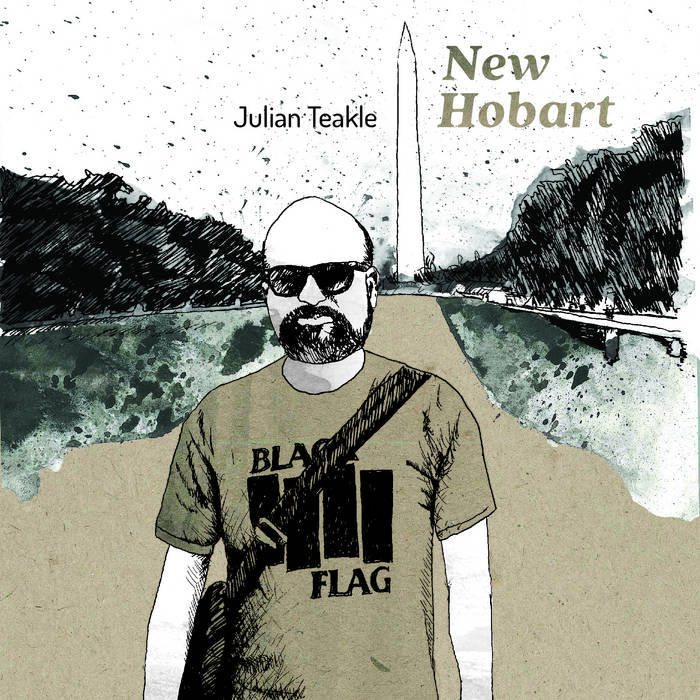 Andy Hazel Such a fantastic album. One I keep coming back to as I'm firming up my end of year album list. Even better live. Favorite track: Here Comes The Bloodless Creeps.

We acknowledge and pay respect to the muwinina people, who are the traditional owners of this land.
Sovereignty was never ceded.

After something resembling a 27 year ‘music career’, playing in such outfits as The Frustrations, Bad Luck Charms, Hobart Improv Collective and currently the Native Cats, Julian Teakle has finally gotten around to doing a solo album. ‘New Hobart’ is a collection of 9 songs released digitally and on a limited run of cassettes by nipaluna/Hobart’s Rough Skies Records.

‘New Hobart’ was pieced together from various ideas in various houses around greater nipaluna/Hobart over a five year period. Songs that reflect a long love of the ideal of the Australian ‘striped sunlight sound’ with the effervescent sparkle of Flying Nun, or the UK’s C86 scene. Music about hating some aspects of the town you live in, while loving others. Punk inspired out-pourings that hopefully piss off your neighbours (and some of your friends).

JT played or programmed everything with a little help from Lisa Rime (Bad Luck Charms, Philomath) who sang on some of the tunes. The songs were mixed and mastered by Sir Mikey Young, with album art by Brendan Boucher. The album comes out on Rough Skies Records, the label JT started in 2009, and now runs with Claire Johnston (Slag Queens). Maybe there’s something inspiring that could be inserted here about ‘coming full circle’ or ‘journey’? Essentially, however, the label continues its remit to document Tasmanian music on its 27th release, even if it’s JT pushing his own flippin’ barrow. ‘New Hobart’ is distributed digitally by Gaga Digi.

December 2020 saw the first gig where these songs were performed live by JT and the Mean Thoughts, featuring Robert Fisher and Jordan Marson. A second album is being worked on. Keep On Keeping On.